The UK’s Royal Air Force Museum has two major sites: one in London (Hendon) and one in Cosford, Shropshire not far from Birmingham. While Cosford is home to the National Cold War Exhibition and the Research Aircraft collection, the Hendon site has a broader selection of aircraft from the earliest beginnings to the current day on display.

My home airport is Düsseldorf (DUS) and London is an easy one hour flight. I prefer flying into and out of London City Airport (LCY), which is directly connected to the “DLR” train line, with an easy transfer to the “Northern” underground line at “Bank” station. You exit the Northern line (direction “Edgware”) at “Colindale” station. The overall train trip takes about an hour.

The RAF Museum in London is currently being remodeled for a grand “reopening” this year, celebrating 100 years of Royal Air Force. Some parts of the museum were already blocked off when I visited in 2017, so many things will be in different places when the museum renovation is done. One thing I hope the museum will fix, but I somehow think they might not fix, is the lighting. Let’s get that out of the way before we talk about the airplanes:

As of April 2017, the Royal Air Force Museum in London had the most awful lighting conditions of any aviation museum I’ve been to, and that includes some disappointingly dark pits like the Strategic Air Command Museum in Nebraska. 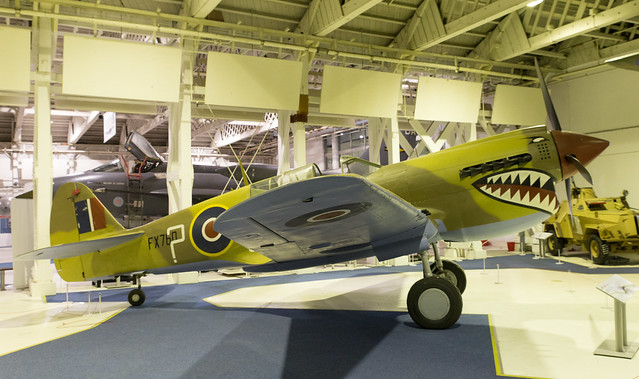 This Curtiss Kittyhawk is not really green, it’s brown. The green is how the camera and you see it. The lighting at the museum douses everything in the “Historic Hangars” in a greenish tinted light. After a lot of tuning in Lightroom, here’s what the airplane would look like with proper lighting conditions: 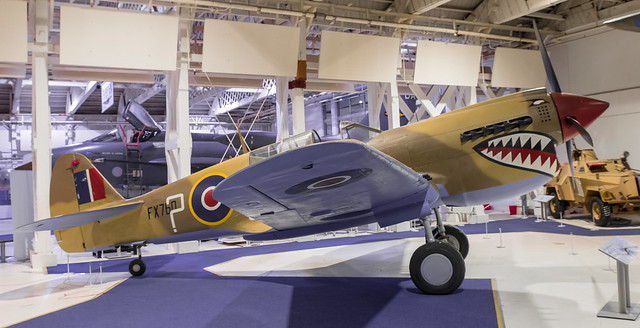 The adjacent bomber hall has similar lighting challenges; the other hangars are a lot better, fortunately. That all said, the collection at RAF Museum London is obviously world-class, with a lot of rare and unique artifacts.

While Cosford houses the oldest surviving Supermarine Spitfire, London’s fighter collection displays one of the youngest, a model F.24 that was only completed in January 1946, and has been flown for a mere 7 hours total. 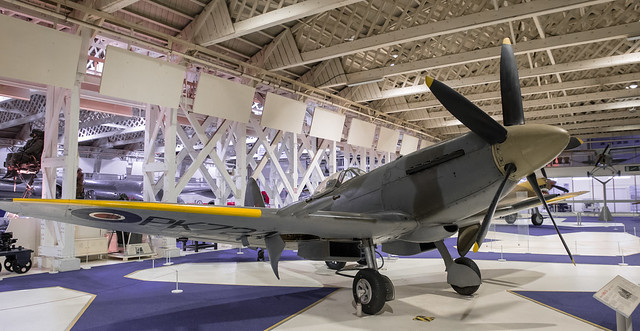 One of the few remaining German Heinkel He-163 “Volksjäger” jet fighters is on display in bomber hall.

The Tornado on display is an ADV F3 model, and a combat veteran of the first Gulf War. The ADV models were originally built as interceptors and have a longer “nose” than the other Tornado models and a stretched fuselage for holding Skyflash missiles; overall, they are nearly 2 meters longer that a Tornado IDS or ECM. 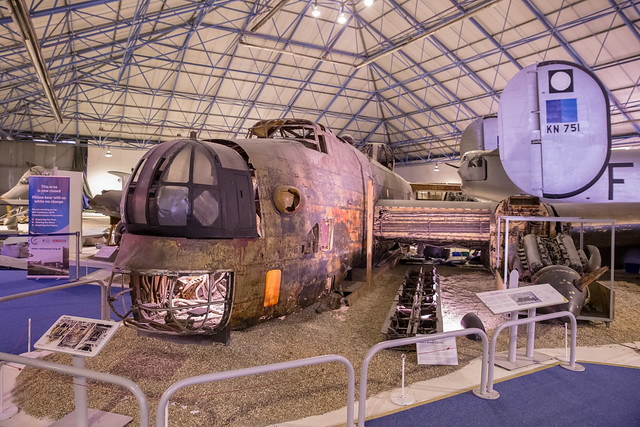 The “bomber hall” exhibit has a nearly complete collection of the aircraft that leveled the cities of occupied Europe and Germany in World War 2. Shown above is the partially restored Handley-Page Halifax B Mk.II W1048 that was recovered from a Norwegian lake:

W1048 was part of a total force of 31 Halifaxes drawn also from Nos.10 and 76 Squadrons. The No.10 Squadron aircraft carried 4000lb bombs, as did those of No.76 squadron, these intended specifically to attack the defences of Foettenfjord (modern day Fetfjorden) near Trondheim where the Tirpitz was moored. Twelve Lancasters of Nos.44 and 97 Squadrons were to bomb the area from 4000 feet. W1048 and the other No.35 Squadron aircraft each carried four 1000lb (454kg) modified Royal Navy type 19N spherical mines, which at 31 inches diameter did not quite fit into the bomb bay, meaning that the bomb doors did not fully close; when the Halifaxes were flying, the groundcrews said they looked like pregnant mayflies. It was hoped that the mines would roll down the steep slopes of the Fjord into the 50 foot gap between Tirpitz and the shore, sink and damage the more vulnerable underside of the ship below the waterline since the decks were heavily armoured.

W1048 was the 8th aircraft to attack, being on target at 0030 hours. Tirpitz was rapidly obscured by a smoke screen, but W1048 shallow dived to 200ft to release her mines; immediately afterwards the aircraft was hit by flak, and the starboard outer engine and wing mounted fuel tanks and surrounding wing structure set alight. The pilot, Don MacIntyre, made a skilful wheels-up landing on the frozen surface of nearby Lake Hoklingen in central Norway 25 miles east of Trondheim. Some twelve hours after the crash W1048 sank through the ice in the southern corner of the lake. Three other Halifaxes were lost during the raid including W1020 also from No.35 3 squadron, plus one Lancaster. The Tirpitz was undamaged.

The WW2 collection also includes the legendary Avro Lancaster, a Consolidated B-24 Liberator, a Boeing B-17G Flying Fortress, and a North American B-25 Mitchell. From Germany, the museum has one of just three original Heinkel He-111 currently on display (there are over a dozen Spanish CASA 2.111 derivatives in museums), and one of just two complete Junkers Ju-87 “Stuka” left (of over 6,500 that were built).

Visually dominating the bomber hall exhibit, however, is the cold war-era Avro Vulcan B.2 XL318. While the Vulcan’s wingspan is similar to that of the B-17 and the Lancaster, it’s 10 meters longer than either, and nearly 2 meters taller than the already imposing Lancaster. And with its delta wing, it simply covers a lot more space.

Also on display from the cold war V-Force is the cockpit section of a Handley Page Victor.

The “Milestones of Flight” hall is currently closed and being reorganized. In my picture collection, you will see aircraft that have meanwhile been relocated, like the Messerschmitt Me-262 that went to Cosford. The Lockheed F-35A you can see in my pictures is a wooden mockup. The Eurofighter Typhoon that hung suspended under the roof is the model’s second prototype “DA2”. the first prototype resides at the flight museum branch of Deutsches Museum in Oberschleissheim near Munich.

Already closed at the time of my visit was the “Battle of Britain” hall.

The Bleriot XXVII (pic) welcomes you to the “Grahame-White Factory & Watch Office”, which hosts the museum’s collection of early aircraft and World War 1 planes. Highlights of the collection is one of the few remaining genuine Fokker DVIII, and an even rarer Sopwith Triplane. 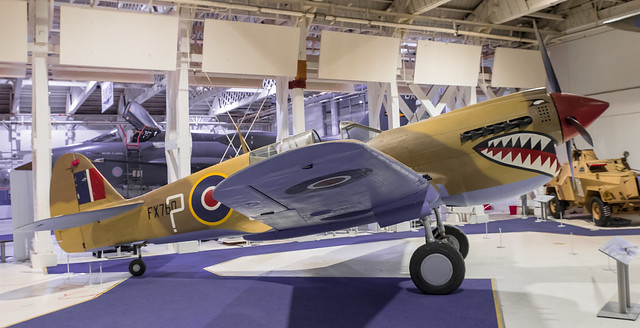