The San Diego Air and Space Museum (SDASM) is one of the museums in San Diego’s centrally located in Balboa Park, right by the world-class San Diego Zoo. SDASM makes the most of the constrained space provided by the Ford Building in which it resides. It has a great and educational on-site collection and is also very active on the Internet with fabulous public media collections on FlickR and YouTube.

The museum is very difficult to miss when you’re in San Diego. Balboa Park hosts a large cluster of different museums, and is also home to the spectacular San Diego Zoo that is well worth spending a whole day at. If you like zoos and have more time in and around San Diego, you should definitely also plan on going to the San Diego Zoo’s Safari Park.

The Air and Space Museum (SDASM) has a parking lot right in front of it and parking is free.

The San Diego Air and Space Museum has fairly limited exhibition space and is using that space exceptionally well. The online presence of the museum is second to none. The SDASM photo archive on FlickR is a fantastic online resource, even though the image scans are all published with fairly low resolution (just 500-800 pixel wide). 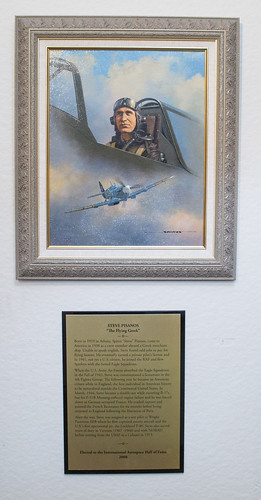 The YouTube archives of the SDASM are just as amazing. The highlight of the video archives are the Oral History interviews where engineers and aviators tell their stories.

The interviewer in this oral history series is Ron Carrico. As I walked into the museum, Ron Carrico sat at the docent desk and since I was wearing a (1960s logo) Lockheed T-Shirt, he was curious whether I worked there (“No, I’m just a geek.”). As I learned, the docents pick up quite a few stories from folks who are/were in the aerospace industry and come to the museum as visitors.

We had a good conversation that then turned into a guided tour of much of the museum and a lot of little stories about particular artifacts. One of those is the portrait of “The Greek” Steve Pisanos, a greek pilot, who first emigrated to the US, then joined the British Royal Air Force, and then the USAF after being the first American naturalized on foreign soil. Steve lived in San Diego, was a friend of the museum, and passed just a few weeks ago. 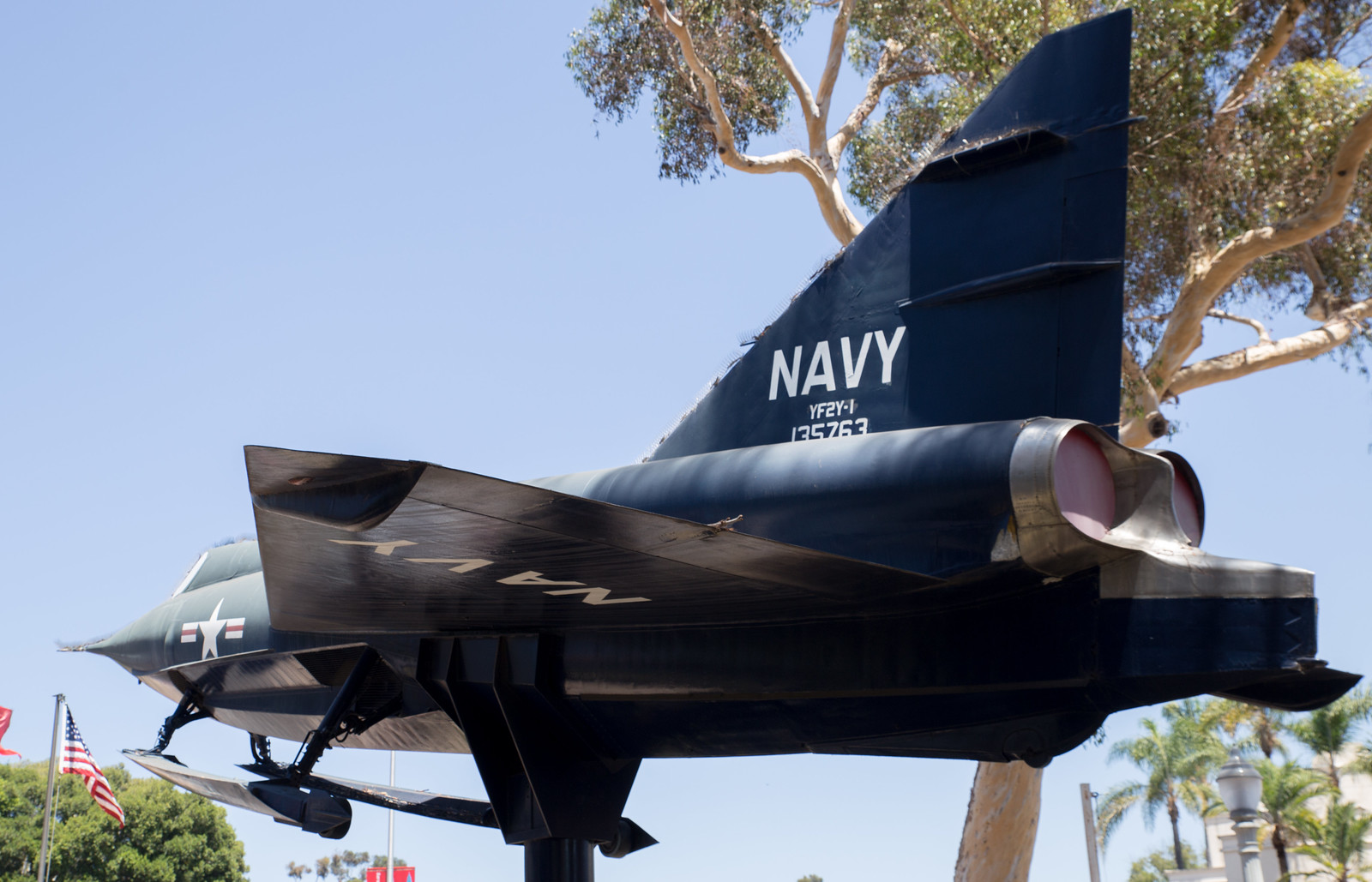 The museum entrance is guarded by two large aircraft. One of Lockheed’s A-12 Blackbirds built for and operated by the CIA under the project name “Oxcart”, and a San Diego constructed and built aircraft, the rare and very unusual Convair YF2Y-1 “Sea Dart”. The “Sea Dart” was a supersonic interceptor aircraft conceived in the early 1950s and was designed to take off and land on water. An “interceptor” is a an aircraft that dashes to meet attacking enemy aircraft and shoot them down. Early jet aircraft, supersonic or not, had fairly sluggish engines and took quite a bit of runway to get airborne. Therefore, carrier operations were thought to be problematic and the “Sea Dart” was considered an alternative - until technology caught up quickly and rendered the “Sea Dart” obsolete before it could be produced.

Oddly, the “Sea Dart” and the Consolidated PBY-5A Catalina in the museum’s atrium are the only Consolidated/Convair aircraft at the museum, even though the former Convair plant at the nearby San Diego airport has produced a variety of civilian and military aircraft. I had at least expected to find a “Convair shrine” with models at the museum.

In addition to many genuine exhibits, the museum’s staff of historians and skilled engineers has built an impressive number of replica airframes that are very close to the originals. The Bell X-1 suspended from the lobby ceiling looks just like the original at the Smithsonian Air and Space in DC. I got a chance to see the restoration shop on the lower floor below the exhibition area and one of the restoration crew was just busy reverse engineering the vertical stabilizer for the current replica project from a set of photos into a CAD program. 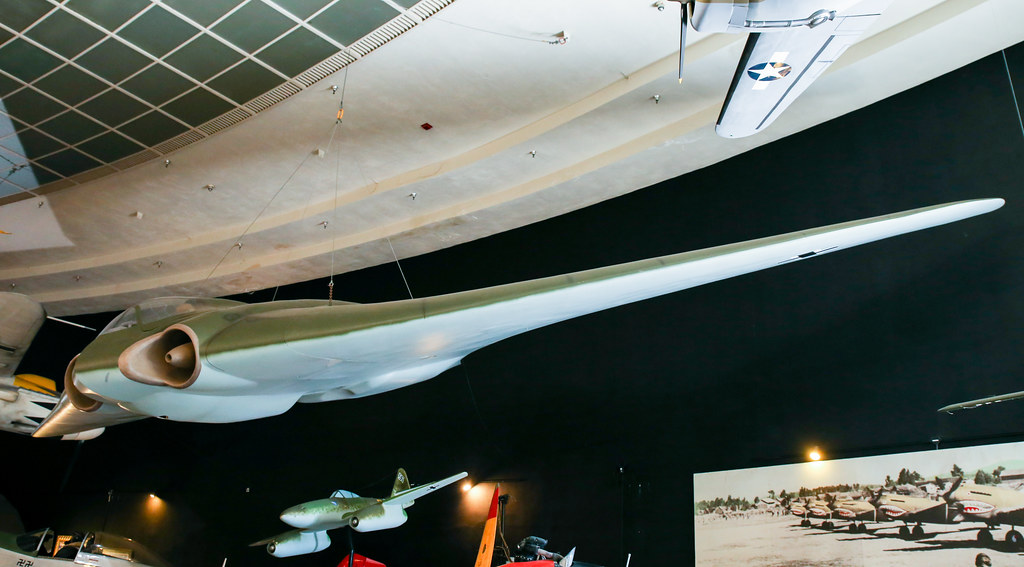 Even though I clearly prefer originals, the Horten Ho-229 replica in the museum was one of the highlights for me. The only remaining original of the Horten H.IX is at the restoration facility of the Udvar-Hazy Center awaiting restoration without hvaing its wings attached, and the San Diego museum’s replica is the only one that gives a good impression of the full aircraft shape. The replica was built by Northrop for National Geographic to measure the stealth capabilities of the Ho-229, which were indeed quite good. 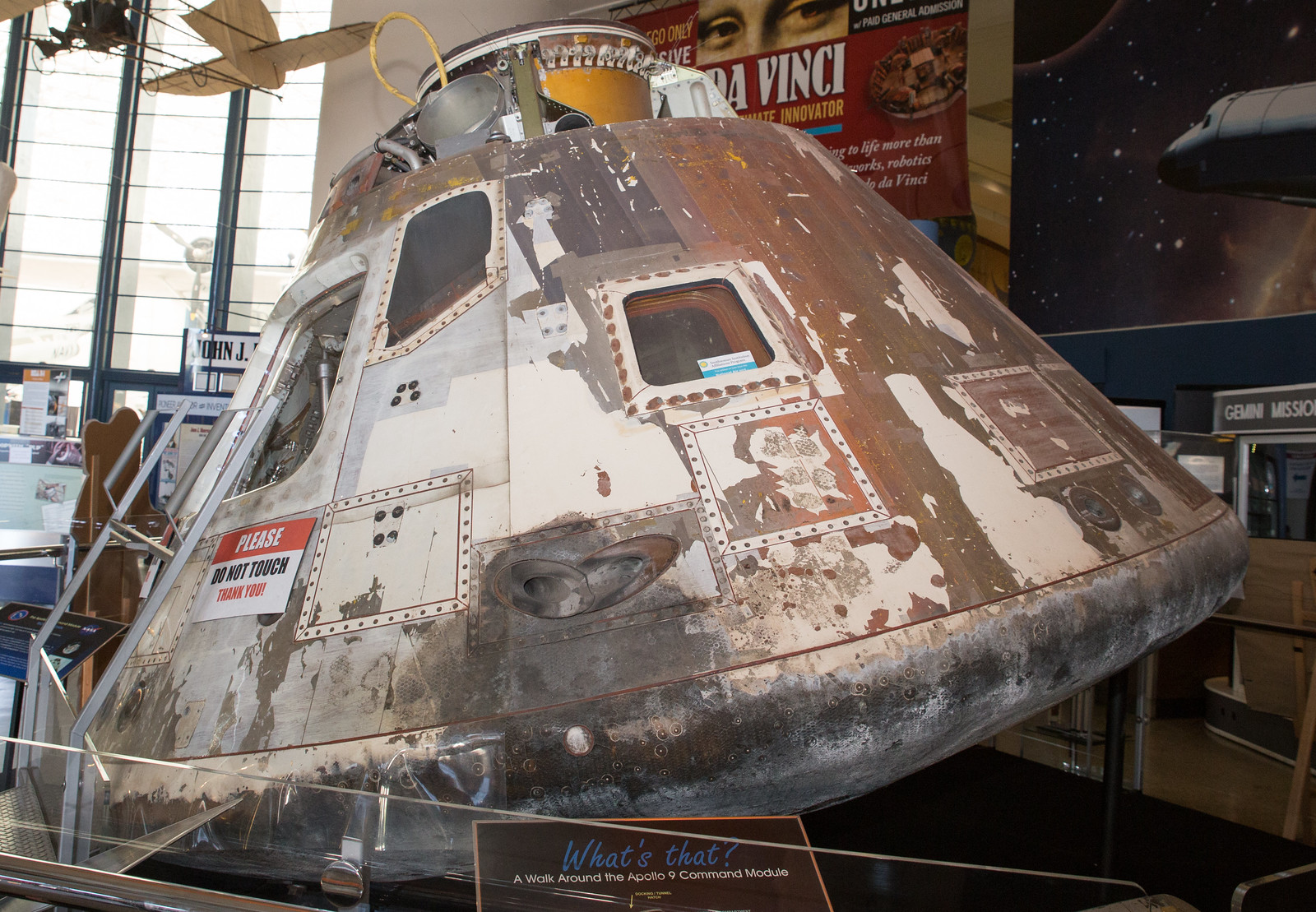 Very original is the Apollo 9 command capsule in the museum’s lobby. Apollo 9 was the first flight of the Apollo program that tested the Command Module and the Lunar Module together and performed the first-ever docking and transfer of personnel between two spacecraft.

More like many other museums of its kind and as a function of available space, the San Diego Air and Space Museum’s collection is one of stories and artifacts, and it’s well worth asking the docents to tell you some.