The UK’s Royal Air Force Museum has two major sites: one in London (Hendon) and one in Cosford, Shropshire not far from Birmingham. The Cosford museum is on the grounds of the RAF Cosford station, a major training facility for various RAF functions. The Cosford site is the home of the museum’s Cold War gallery, a remarkable collection of German missile technology from WW2, and the last existing Comet 1

I made my Cosford visit a day-trip from Düsseldorf. Flybe offers a very convenient direct connection that gets into BHX at 07:15 (BE7040) with a return flight leaving for DUS 19:10 (BE7049).

The easiest way to get to the museum from BHX is to take a train from the airport, which is typically is a one stop connection and takes about 1:15h. The museum opens at 10:00, so I chose to get off the train at Birmingham New Street station to find some breakfast.

Once you get to Cosford, the airfield is right by the rail line, and from Cosford station it is an easy 10 minute walk along the fence to the museum entrance.

The RAF Museum’s Cosford site is made up of a visitor’s center (home to the ticket office, the museum restaurant, and conference facilities), four exhibition hangars, and several outdoor aircraft.

The Hawker-Siddeley Nimrod R1 XV249 whose picture is shown above in the banner, is the star of the outdoor exhibits, along with a Lockheed P-2 Neptune formerly with the Dutch Navy, a Vickers VC-10, and a Lockheed C-130 Hercules. By the gate, you’re greeted by the giant Bristol Britannia 312 G-AOVF/XM497. The Test Flight hangar is home to Cosford’s research aircraft collection. The greatest attraction in the collection is certainly the BAC TSR.2 XR220. The TSR.2 was meant to be a supersonic (nuclear) strike and reconnaissance aircraft that could penetrate enemy defenses in low-level cruise and strike high-value targets with great precision. The program was cancelled in 1965, with the Chancellor declaring that the U.S. built General Dynamics F-111 will be cheaper and adequate to fill the intended roles. The F-111 order was eventually also cancelled in 1968. The XR220 on display in Cosford was readied for its maiden flight on the day of the cancellation decision being made public (April 6, 1965), but it never came to that.

Following a unanimous Cabinet decision on 1 April, the TSR-2 project was publically cancelled by Harold Wilson’s Labour Government, the announcement coming in that day’s Budget Speech by Chancellor James Callaghan. XR220 had been intended to fly that morning, with Deputy Chief Test Pilot the late Wing Cdr James ‘Jimmy’ Dell as the pilot; this was delayed by the need to replace a faulty fuel pump discovered during pre-flight engine checks that morning. That afternoon the TSR-2 project was infamously cancelled in the budget speech and all work suspended before the aircraft could fly, despite Dell’s attempts to return to the airfield after lunch to fly the aircraft having heard the cancellation announcement on TV. The aircraft was already impounded when he got there, its certificate for flight having been withdrawn.

The UK government swiftly ordered all prototypes and tooling to be destroyed, but XR220 seems to have escaped scrapping because it was subsequently used for ground running trials of the Rolls-Royce Olympus 22R-320 engines in support of the Concorde program. XR222, the other survivor now at IWM Duxford, was still under construction when the program get cancelled and lucked out by initially being donated to the College of Aeronautics as a study object.

Other notable pieces in the Test Flight hangar are the English Electric Lightning’s precursor P.1A, the experimental high-speed aircraft Bristol 188 (was meant to achieve M2+, reached M1.88), BAe’s Eurofighter Typhoon precursor EAP, the sole remaining Hawker-Siddeley Kestrel in the UK (precursor of the Harrier), and a rather odd looking Gloster Meteor modified for tests with the pilot flying in prone position (picture).

Adjacent to the Test Flight hangar is the War in the Air hangar that’s home to a collection of rare military aircraft, the majority from World War 2.

There are many Supermarine Spitfires in museums and quite a few are still flying. The Mk1 in the War in the Air hangar is the 155th ever built, and the oldest one still existing.

The hangar is also home to several German warbirds. The Messerschmitt Me-410A-1-U2 is the only survivor of that type on display (the only other survivor is in storage at the Smithsonian Air and Space museum). A rocket-powered Messerschmitt Me-163 “Komet”, a Focke-Wulf Fw190, and a Fieseler Storch are also on display.

In the same hangar, the RAF Museum displays several Japanese aircraft, like a Kawasaki Ki-100. 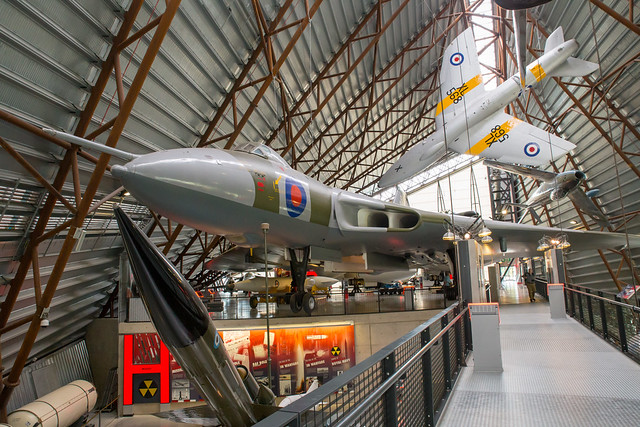 The National Cold War Exhibition is the Cosford’s site newest exhibition hangar, and the only place where you can see the UK’s “V Force” bombers in one place. The last intact Vickers Valiant XD818, in blinding flash white, rests here next to Handley-Page Victor K.2 XH672 and Avro Vulcan B.2 XM598. The General Dynamics F-111F that shares the upper gallery space with the V-Bombers really seems like an insider-joke placeholder for the TSR.2.

The Cold War gallery also hosts a Berlin Airlift exhibit, a handful of tanks, and several transport aircraft. Above them hang a English Electric Lightning in a dramatic vertical position and a Hawker Hunter, and a Thor missile towers up to the gallery ceiling. 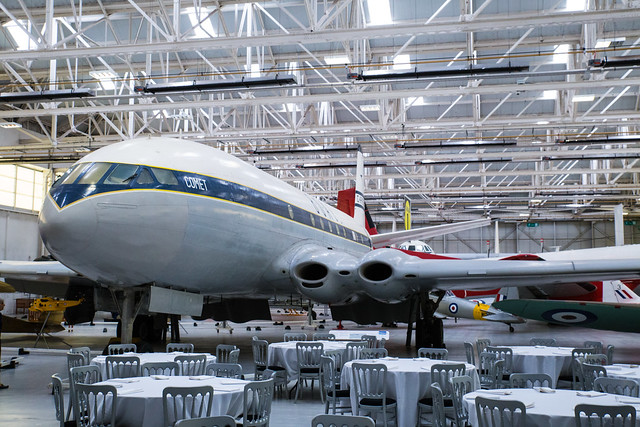 Hangar 1 is home to the trasport aircraft collection, which includes the only surviving Comet 1. The original Comet 1 was infamously constructed with square windows, which were the root cause for a series of accidents that had the revolutionary jet powered Comets disintegrate and fall out of the sky. Test panels from the accident investigation sit alongside the Comet in the gallery. The aircraft is a “1XB”, which was re-fitted with oval windows. Even though it is shown in BOAC colors, it never flew for that airline.

A gem that’s easily overlooked is the Cosford collection of German WW2 missile technology from near the end of the war. In addition to the famous V-1 flying bomb and the V-2/A4 rocket, you can find several air-to-air and surface-to-air missiles many of which came too late to be used on combat.