The National Museum of the United States Air Force (NMUSAF) is one of the biggest aviation museums in the world. Located just south of Wright-Patterson Air Force Base near Dayton (Ohio), the museum consists of four giant exhibition hangars and additional outdoor exhibition space.

Both times I visited Dayton, I’ve stayed at the Dayton Crowne Plaza. The Crowne Plaza is an ageing place and urgently needs an overhaul, but the rooms are ok and the grand advantage of it is that it is located just a short walk away from the “Oregon District” on East 5th street, which is Dayton’s restaurant and bar row. The Crowne Plaza also has the advantage of offering a free (but please tip the driver) shuttle service from and to the airport, picking up passengers right in front of the terminal. It’s advisable to call ahead; I was lucky to get there when the van driver was waiting for an air crew.

My favorite spot in the Oregon District is Lucky’s Taproom, which has a good selection of craft beers; they’re also football (soccer) friendly and had the European Championship games on while I was there.

Contrary to my usual habits of getting a rental car, I’ve largely relied on Uber for the August 2016 trip (Lyft, my preference, doesn’t yet serve Dayton). The rides between the hotel and the museum cost around $10. One of the drivers tried hard to get me killed by running a red light into a busy intersection, but here I am.

As the official museum of the Air Force, the NMUSAF collection holds one of nearly every aircraft ever flown by the Air Force and its predecessor Army Air Corps. Many aircraft on display at other museums also remain property of the U.S. government and are managed as part of the NMUSAF collection, and are given to those museums on permanenent loan. 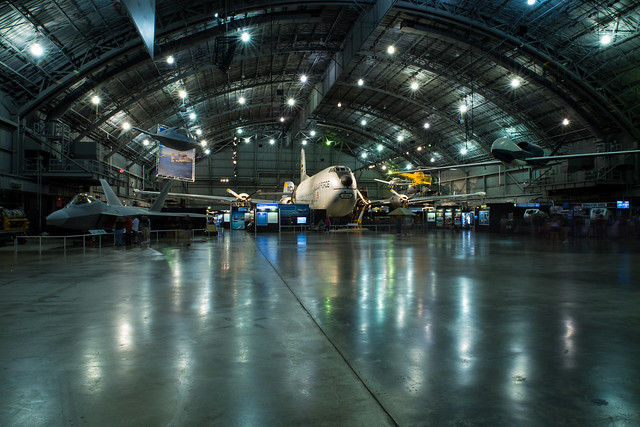 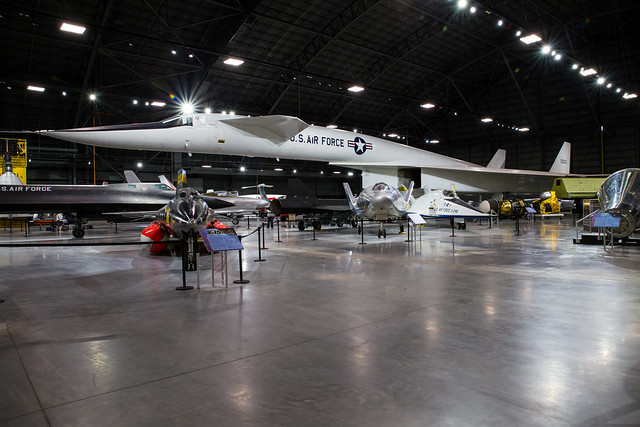 The NMUSAF collection in Dayton holds many unique aircraft of historical significance. The crown jewel is the giant supersonic test aircraft North American XB-70 Valkyrie, originally meant to become the B-70 bomber. The XB-70 is the sole survivor of the test program, with its sister ship having crashed during the program. 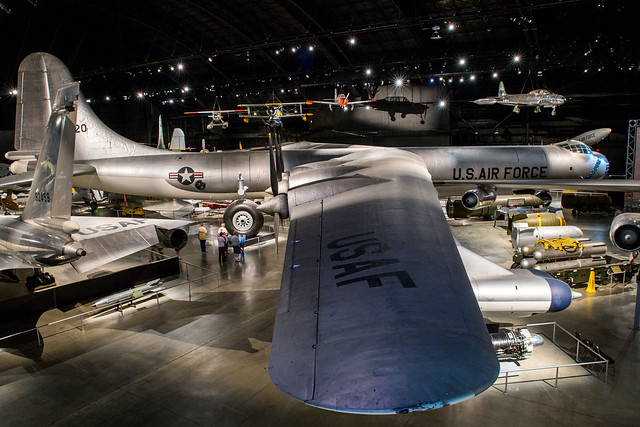 The Convair B-36J bomber is one of four remaining of its kind. The “Peacemaker” is the largest combat airplane that has ever flown, with a wingspan of 70m and a length of nearly 50m. The vertical stabilizer stands 14m tall. It was conceived in the 1940s as a long-range bomber that would allow attacking Nazi Germany from U.S. soil without refueling, and was introduced into service to carry nuclear bombs. Like several other U.S. bombers such as the B-47 and B-58, the B-36 was not designed or equipped for conventional bombs. The B-36J in the museum is the last one built and it’s by far in the best shape of all four survivors.

The Convair B-58A was a medium-size supersonic (Mach 2) bomber that held two weapons in a detachable pod under its belly. It was designed for a high-altitude, high-speed mission nuclear attack mission profile, and is said to have been very difficult to handle, and was extremely expensive as a weapons system. The B-58A 59-2458 at the museum won the last Bendix Trophy race in 1962. 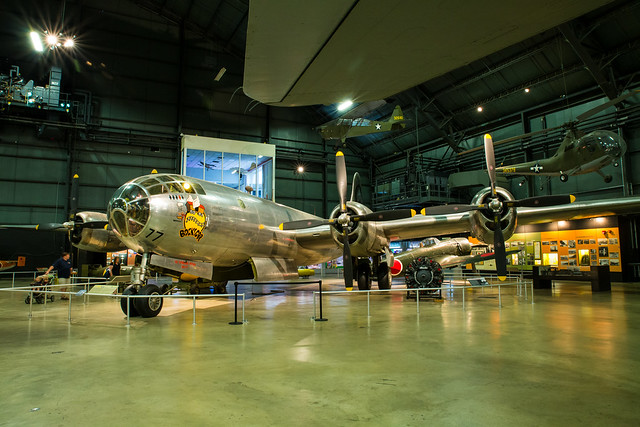 The Boeing B-29 Superfortress “Bockscar” at the museum is the one that dropped the nuclear bomb on Nagasaki in August 1945. Casing replicas of the “Fat Man” bomb (yellow) dropped on Nagasaki and the “Little Boy” bomb (green) dropped on Hiroshima can be seen in the foreground. The “Little Boy” bomb is a uranium U235 “gun” bomb; “Fat Man” is a plutonium-based “implosion” bomb. 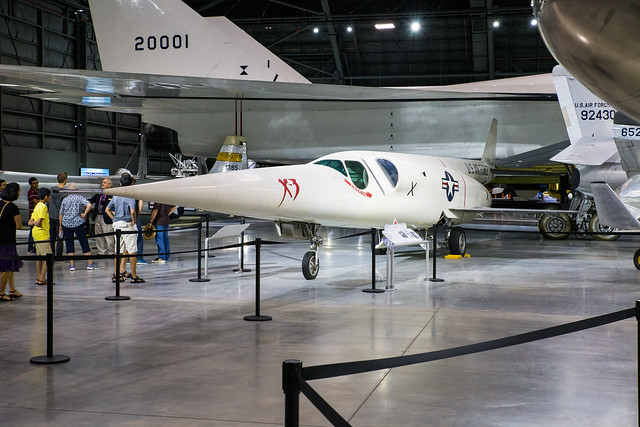 The Douglas X-3 “Stiletto” looks like a hot-rod, but didn’t fly as well as expected. It was designed to research specific aerodynamic features in Mach 2 cruise flight, but the aircraft was so underpowered that it could not even exceed Mach 1 except in a shallow dive.

Jump straight the FlickR album or look at it here: 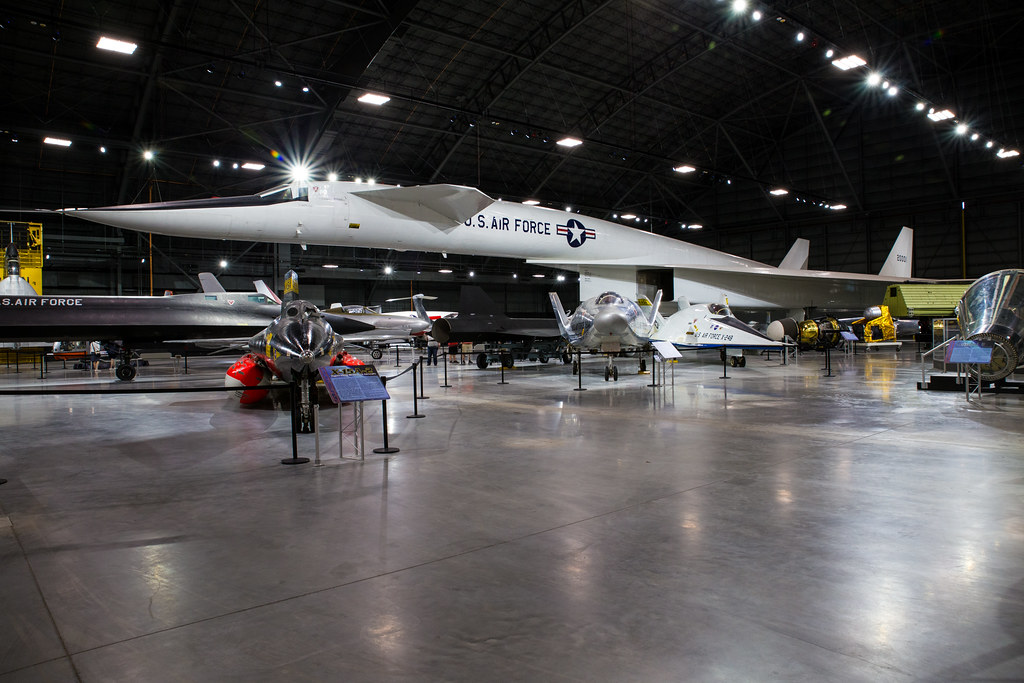