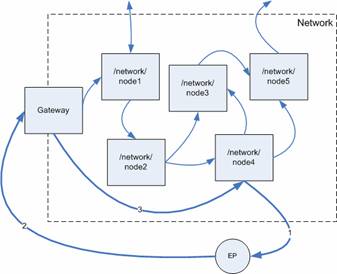 A network defines a group of nodes that exchange messages. The network defines a trust perimeter in regards to security and behavior around a set of nodes and is the smallest unit of configuration in FABRIQ. Nodes inside a FABRIQ network should not be exposed to and should not directly addressable from entities outside the network. Securing a FABRIQ network and access to its nodes is not in the scope of this specification, but it is assumed that FABRIQ networks run within a secured environment that allows no foreign (potentially hostile) access. 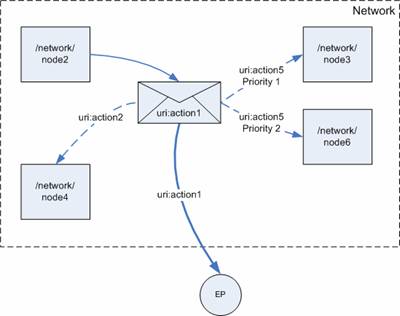 channels between nodes may be guarded by transport level security, but this is not made a requirement. This relaxed security model and the requirement for absolute security trust between nodes is introduced to allow the network to operate at very high speed. The expense of security verification is consciously pushed out to the network perimeter using a single gateway.

There is no predefined message flow inside the network. Each node may send messages to any other node in the network directly. If a node does not choose to specify an explicit destination address during processing, the message is relayed along one of the routes specified for the node, which may lead up the next node or even an external endpoint. 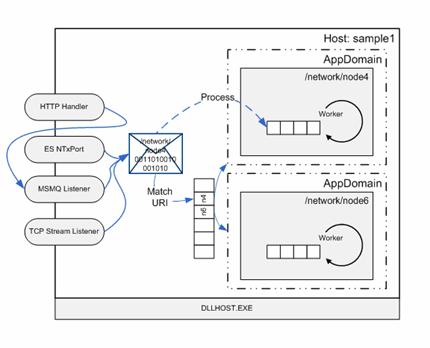 process (using the Enterprise Services process model). There is exactly one such service process per machine inside a FABRIQ machine cluster. The service process provides a set of communication ports and hosts any number of node instances.

The communication ports will not attempt to read incoming messages. Their only purpose is the yield either a byte array or a stream of data accompanied by a URI. The relative node URI, which is assumed to be the rightmost part of the URI is used to match against a map of the nodes the host is current running. Once a match is found, the incoming raw message is handed into the node’s application domain and there into a thread pool wait queue and is only cracked (parsed) and processed once a thread becomes available for that message. 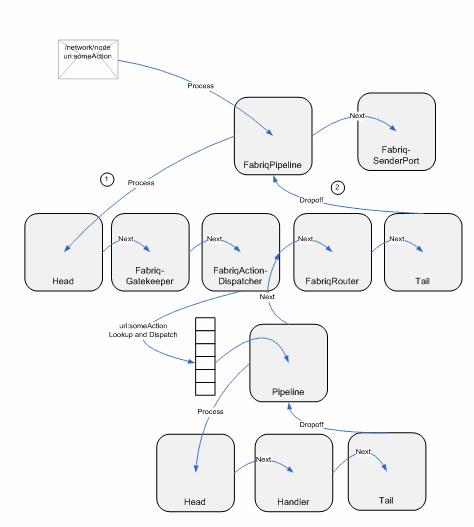 the XmlReader. That message object is then handed into the node’s main pipeline for processing. The main pipeline consists of a “gatekeeper” that is responsible for ensuring that the incoming message contains all required headers and will also enforce policy. The “action dispatcher” will dispatch the message to a concrete action pipeline (there can be any number of actions per node). Once the message has been processed by the action’s pipeline, the resulting message(s) are passed to the “router”, which determines the route for the message. Once the message is routed (which may result in the message being sent to multiple destinations concurrently), the “sender port” is responsible for getting it “out the door”.