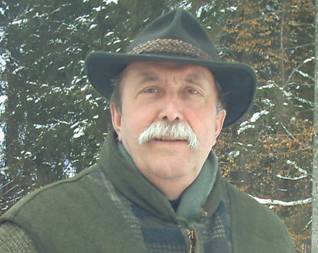 I keep blogging about great people who do amazing things. Here’s someone else who did an amazing thing: me ;-)  Meet the grand master and anchor of our branch of the Vasters clan: Richard Vasters.

My dad is a Bezirksschornsteinfegermeister (“district master craftsman chimney sweep”, very different job description from what it is in the U.S.) and a computer veteran without wanting to be. He’s been using PCs since 1987 and he’s constantly refusing to learn more than absolutely necessary and I keep being “support central”.

Because he’s so stubbornly refusing to deal with computer complexity I don’t even get upset anymore about saying “space” and “enter” whenever I have him navigate the command line over the phone (which luckily became very rare) or keep repeating any detail of sequences getting him through various levels of dialog windows. Also, even though my dad is a language genius (he speaks no other language than German properly, but he mysteriously manages to express himself to people from any corner on the planet just fine), he’s not even remotely willing to deal with “File” and “Edit” menus and insists on having the German “Datei” and “Bearbeiten” menus instead. I mostly don’t even know what most apps look like in German, since I am running the U.S. English versions all the time. Yet, to help him I need to know cold what’s going on his screen when he’s pressing this key and clicking that thing when I have to navigate him though stuff on the phone – otherwise I’d just go insane.

On the way home from TechEd  Amsterdam, I finally found time to upgrade his desktop from Windows 98 to XP (the XP carton was sitting idle on his desk for months), set up a wireless network (all the WLAN router was doing was to consume power) with internet connection sharing, firewalled everything, patched the desktop and the notebook up to the latest fixes, installed virus scanners (and sure enough found one), hooked up the printer to the WLAN hub and got him on MSN Messenger – and to my complete surprise (and shock because of the inherent consequences!) Remote Assistance actually works from my place to the “family mansion”. Now he’s thrilled that he can issue print jobs to the printer in the office from the terrace without any wires.

Dad uses his PCs (the desktop and the notebook) exactly for one thing: getting stuff done. He has little to no interest in how things work and if stuff is too complicated he just ignores it and gives up immediately, because it’s just too annoying. For me, he’s always providing an absolutely amazing “reality check”. Sure enough, a German news channel was running a special program on Linux while I was there and there came the inevitable question: “Is that something for me?”  Now there’s a support nightmare I am absolutely looking to avoid and answered with a resounding “No!”

You think I am just a stupid dork and too lazy? Here’s the challenge to a daring (sorry, !insane!) individual: Install Linux on the desktop box (the notebook will remain to be XP), offer a year of free German language phone support with 24 hour turnaround time and on-site support with 72 hour turnaround time and get it all to run and maintain it (including patches) so that my dad can comfortably run all the apps he needs to get his work done (sorry, all Windows apps with no Linux alternatives; so WINE would have to do it and the respective ISVs – all relatively small firms with vertical solutions – will deny any of their support on any non-Windows platform). If you succeed and make it through the year without having to check into a psychiatric hospital, I’ll happily admit that Linux is ready for the desktop. If you fail, you owe us a year’s supply of beer. I think that’s a fair deal, because it’s oh-so ready, you can’t fail at that task, right?